1. Michelangelo first rose to prominence after a failed attempt at art fraud.

In 1496, Michelangelo made a sleeping cupid figure and treated it with acidic earth to make it seem ancient. He then sold it to a dealer, Baldassare del Milanese, who in turn sold it to Cardinal Riario of San Giorgio. Riario later heard rumors of the scam and got his money back, but he was so impressed by Michelangelo's skill that he invited him to Rome for a meeting. The young sculptor would linger in the Eternal City for the next several years, eventually winning a commission to carve the Pieta, the work that first made his name as an artist.

2. Pieta was the only work Michelangelo ever signed

According to Michelangelo's contemporary and biographer, Giorgio Vasari, shortly after the installation of his Pieta, Michelangelo overheard someone remarked that it was the work of another sculptor, Cristoforo Solari, whereupon Michelangelo signed the sculpture. Michelangelo carved MICHAELA[N]GELUS BONAROTUS FLORENTIN[US] FACIEBA[T] (Michelangelo Buonarroti, Florentine, was making this) on the sash running across Mary's chest. It was the only work he ever signed. Vasari also reports the anecdote that Michelangelo later regretted his outburst of pride and swore never to sign another work of his hands.

Michelangelo and Leonardo da Vinci felt "an intense dislike for each other," says their biographer Vasari. Michelangelo and Leonardo stood out as strong and mighty-personalities with two irreconcilably opposed attitudes to art. Their fierce independence led to clashes whenever circumstances brought them face-to-face. One day, Leonardo da Vinci was passing through the Piazza Santa Trinita in Florence. Some gentlemen were debating Dante in front of the Spini family palace. They called Leonardo over and asked him to explain the passage they were puzzling over, but just at that moment Michelangelo happened to come along and Leonardo instead suggested that the sculptor elucidate it. This proposal annoyed Michelangelo. Instead of discoursing on Dante, he addressed Leonardo in the disrespectful "tu" form, and snapped back, "You explain it yourself, you who made the design of a horse to be cast in bronze, but who was unable to cast it." With that, he strode away, leaving Leonardo standing there, "made red in the face by his words".

4. Michelangelo carved the "David" from a discarded block of marble.

David, the astonishing Renaissance sculpture was created between 1501 and 1504. In 1501, Michelangelo was only 26 years old, but he was already the most famous and best paid artist in his days. David was originally commissioned by the Opera del Duomo for the Cathedral of Florence. The project begun in 1464 by Agostino di Duccio and later carried on by Antonio Rossellino in 1475. Both sculptors had in the end rejected an enormous block of marble due to the presence of too many "taroli", or imperfections, which may have threatened the stability of such a huge statue. This block of marble of exceptional dimensions remained therefore neglected for 25 years. When he started, Michelangelo had amost mystic believe that the figure he carved already existed fully formed within the block of stone that was badly damaged by earlier artists. By studying the raw marble, examining the patter, he could sense where the figure stand. Then layer by layer, blower by blower, after four year of hard labor, he liberated from this rocky prison his creation - the magnificent statue of David.

During the time Michelangelo worked on his masterwork The Last Judgement, pope Paul III went to visit the Sistine with his entourage of prelates. Among them was the pope's Master of Ceremonies, Biagio da Cesena, who was absolutely scandalized by the great quantity of naked figures and strongly protested, affirming that a fresco of that kind didn't deserve anything more than the wall of a bar.

Michelangelo responded by painting Biagio da Cesena into Hell, as Minos, judge of the souls, with two huge asses ears and a serpent intent on nibbling his genitals. When the Master of Ceremonies resentfully complained, the pope responded by saying that his jurisdiction unfortunately didn't cover Hell.

6. Michelangelo painted his Self Portrait in The Last Judgement of the Sistine Chapel 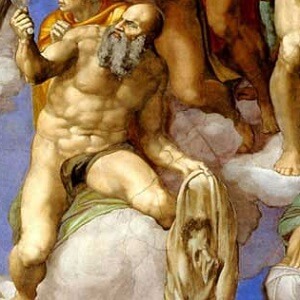 The Last Judgement by Michelangelo covers the wall behind the alter in the Sistine Chapel. The work depicts the second coming of Christ and, although the artist is clearly inspired by the Bible, it is his own imaginative vision that prevails in this painting. Saint Bartholomew, one of the apostles features rather uniquely within the composition of the Last Judgement. Saint Bartholomew in fact holds the skin of what we believe is a self portrait of Michelangelo himself. In the portion of the fresco Michelangelo references some of the heinous ways martyrs were slayed, also referencing Bartholomew being skinned alive.

7. Michelangelo was also a prolific poet

Throughut his life, Michelangelo wrote over 300 poems. Many of his most impressive sonnets were written to his close friend Vittoria Colonna. Many incorporate the philosophy of Neo-Platonism - that a human soul, powered by love and ecstasy, can reunite with an almighty God.

8. Michelangelo was the wealthiest artists of his time

Although Michelangelo was known to be reasonably well off, new research suggests that he was fabulously wealthy. Michelangelo was well paid by Pope Julius II, one of his great patrons, and he also invested widely and successfully in property. Michelangelo's riches would have made him one of the wealthiest artists of his time, putting him in a category that was streets ahead of Leonardo da Vinci, Titian or Raphael. When he passed away, Michelangelo left an estate worth 50,000 florins - about $50 million in today's money.

9. Michelangelo lived for 89 years - an unusually long lifespan for a man of his era

In 1557, Michelangelo had been forced to leave Rome due to the threat of invasion by Spain; he spent several of the last years of his life traveling in much the same way as he had started his adult years. He returned to Rome after the thread had passed. Michelangelo died after a short illness in 1564 at 89, surviving far past the usual life expectancy of the era. He was buried at the church of Saint Apostoli in a huge formal ceremony.

10. Michelangelo was the first western artist whose biography was published while he was alive.

Two biographies were published of him during his lifetime; one of them, by Giorgio Vasari, proposed that he was the pinnacle of all artistic achievement since the beginning of the Renaissance, a viewpoint that continued to have currency in art history for centuries.